It was only years after Prince left his religion, and after he had descended back into a life of drug abuse, brushes with the law, and financial destitution, that he started to invent tales about the Church for personal profit.

What changed with Prince that he now recounts his experiences so differently? 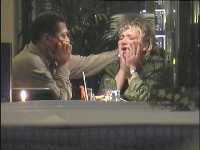 Outside of the ethical atmosphere of the Church, and without his Church friends to help him stay on the straight and narrow, Prince reverted to his old, unethical habits. Having abandoned the Scientology principles he had learned and applied successfully, he soon found himself without friends and in desperate need of money.

The decline began in 1994. A Minneapolis Church staff member had introduced Prince to a local Scientologist businesswoman who gave Prince a well-paying job. He repaid this opportunity by sexually harassing the female employees while his employer was out of town on a business trip, to the extent that they filed complaints about him. Prince also reverted to his pre-Scientology habits, abusing drugs and conducting extramarital sexual affairs. Prince admitted to luring a dozen employees of this company into his unethical behavior.

Despite his professed intention to be “clean” and avoid being fired, Prince could not control himself for long. He began stealing from his employer and reverted to using drugs and alcohol. When other employees discovered his thefts, he resorted to threats of physical violence against them. The police had to be called in to deal with the matter.

Prince’s wife left him shortly thereafter. He apparently continued to incur debts and, by early 1998, his life was in a shambles. He filed for bankruptcy. At that time, out of work and in need of money for his habit and his creditors, Prince concocted a plan to extort money from the Church of Scientology. He hoped to be financially dissuaded from lying to the media and selling himself as a “witness” for anti-Scientologists.

When the Church did not bow to his attempted extortion, Prince then made it clear that he intended to make such a public problem of himself that the Church would relent and buy his silence.

Thus, in mid-1998, Prince sold his services to the hate group FACTNet. At this time, the principals of FACTNet were being sued for unlawful copyright infringement of Scientology materials; one legal action against a FACTNet director had been adjudged in the Church’s favor and a second case, representing a multi-million dollar liability for FACTNet, had progressed to a decisive stage. Prince found a ready market as a paid witness for FACTNet’s defense.

Prince proclaims altruistic purposes for his anti-Scientology activities. If that were the case, he would do it for free.

Instead, in a period of only four months following his initial payment for his concocted statement, Prince received cash, a car, and living expenses worth well over $30,000.00. These payments were made in return for the false statements in his testimony and as a fee for working with a FACTNet director to get his claims publicized by the media. After several months of peddling himself to the U.S. media, only a couple of newspapers even quoted him.

Prince’s attempts to pose as an expert witness have met with repeated failure. In one sworn declaration Prince pretended to be knowledgeable of copyright law and procedures but, when he was questioned about the subject matter under oath, the depth of his ignorance was profound. In another case, his declaration was found to be inadmissible.

This willingness to say anything for money, even to the extent of falsely claiming legal expertise, is particularly revealing of his motivation. A deposition taken on August 19, 1998 laid bare Prince’s utter lack of knowledge and expertise in the area, so much so that the FACTNet defendants chose to settle the case for a permanent injunction and a $1,000,000.00 judgment against them to be paid if they ever violate the injunction, rather than face a trial with Prince as their witness.