Vickki Ford Cook appears on this site at the request of her son, George Ford. In 2001, Ford Cook began a campaign to embarrass and discredit the Church of Scientology, with the excuse that she wanted to “get her son back”, a respected staff member. For 11 years prior, Ford Cook and her husband, David, had been members of the Church. However they had also been engaged in activities that were not living up to the ethical standards required by the Church, and once this was discovered, rather than fully cleaning up their act as requested of them, they choose to be expelled by the Church, and then use the excuse of the son wanting to stay in Scientology to blame the Church for their situation.

According to George Ford’s letter, it wasn’t until Vickki and David Cook rescinded their membership in the Church, that they began hounding him to leave. Mr. Ford is 25 years old, happily married for several years, with a responsible career which he enjoys very much. When he refused to “abandon my wife, my church, my career, my home, my friends and my way of life and live with her in Georgia” Vickki began to spread false allegations about her son and the Scientology religion, hoping to force the issue. 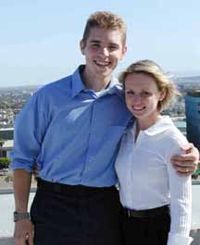 George Ford and his wife

“Since 2001 my mother has made outrageously false claims against me and my religion in paid newspaper and magazine advertisements, on talk radio shows, on the Internet and in letters written to the Los Angeles Police Department, the Los Angeles County District Attorney’s Office, the Los Angeles County Coroner, and to others. She actually made out a Missing Person report with the Los Angeles Police Department, which caused me to leave work and go down to speak with the detective assigned to “find me.” This was very embarrassing to me as I then had to explain in detail the reasons why my mother and her husband were being so disrespectful to me. After the police detective conducted his investigation he concluded my mother’s allegations were baseless, and told her so.”

Mr. Ford’s letter explains in detail why he believes his mother is making such allegations.

“Another aspect my attorney is helping me sort out is my ‘working relationship’ with my mother and her husband’s business. After having received an unexpected letter from the IRS, which indicated I had earned money I had actually never seen, we started looking into this by contacting the IRS and the CPAs used by my mother and her husband; so far we are finding strong indications that she might have been using my name as a “ghost employee” in the context of some tax fraud. I am still in the progress of sorting this all out, but this might shed some light on my mother’s persistence in trying to get me under her thumb.”

“My mother has a history of lying for monetary gain. For example, throughout her recent campaign to embarrass and discredit me, my mother has stated that she has always been a very devoted and caring mother. The facts, unfortunately, are otherwise. She even has a website where she solicits money “to help people with missing persons” and directs the contributors to make out their checks to “Vickki Ford”.

These facts, as Mr. Ford relates them, reveal a very different portrait of Vickki Ford Cook than the one she presents. In painful detail Mr. Ford explains about how his mother’s obsession with obtaining wealth through a string of short-lived marriages (one that lasted a month, another for only a few days) all ended in acrimonious divorce but, in at least two cases, resulted in handsome settlements. One of these divorces was from Ford’s natural father, whom Vickki Ford Cook later vilified to her son and claimed had died when George was little. It was only years later that George Ford discovered that his mother had repeatedly and blatantly lied to him. His natural father is living and is a well-respected and thoroughly decent and honorable man. However, due to Vickki’s “habitual cruel and inhuman treatment” of him, as documented in their 1978 divorce proceedings, the marriage ended so bitterly that Mr. Ford has never met his father.

“I have spent most of my life living with the repercussions of my mother’s reprehensible behavior. In exchange for quick cash and the promise of new cars, my mother severed my relationship with my real father, destroying any hope of growing up with a father in my life and forfeiting any “birth rights” I had with him. She refused to allow me to think well of him, even when claiming he was dead. I have never met my natural father and my brothers and, due to the misery my mother caused, probably never will.”

“Understandably, my natural father is now afraid to have anything to do with me. My mother’s “gold-digging” marriages left me with a string of short-lived stepfathers, most who were never around long enough to even attempt a relationship. Then came David Cook, not a strong-willed man, whom she convinced to adopt me against my will, so much so that I refused to take his name as my last name. I cannot find any logical reason for her to insist so much.”

A third ex-husband was left emotionally and financially ruined as a result of his marriage to Vickki. Another husband was falsely accused by Vickki of molesting her son – an allegation that was only dropped after the husband agreed to pay Vickki a large sum of money. In his letter, Mr. Ford reaffirms and documents that the molestation charges levied by his mother were completely untrue.

In her youth, Vickki Ford was occasionally employed as a lounge singer, which is how she met two of her husbands. Although during her first divorce proceedings, in an attempt to obtain more spousal support, she claimed that she would never be able to resume her singing career due to a throat operation, Vickki turned up some years later singing in an Arizona resort and continued to actively pursue a future in show business. In fact, her third husband stated that she was so obsessed with becoming a rich and famous singer that she forced him to leave his business and move to Georgia in pursuit of a talent agent. Vickki’s career never got off the ground, however it now appears that she hasn’t given up her dreams of glory. As part of her campaign to discredit her son and his Church, Vickki Cook has established a website which she calls the “missing persons” – a platform which she uses to propagate the fiction that her son is a “missing person” and which she hopes will launch her into show business with a TV show of her own (with the benefits of a non-profit status and donations being solicited – to be paid to herself, as the “director” of this “show”).

Any media representatives or law enforcement officials contacted by Vickki Ford Cook regarding her “missing persons” campaign are advised to read the attached letter, submitted to Religious Freedom Watch by her son, so as not to be taken in by her lies and not to be involved in her personal hidden agenda.