Jeff Jacobsen portrays himself as a peaceful activist using what he claims to be the way Mahatma Gandhi conducted his activism. Let’s examine this closely.In one of the documents received by parishioners.org Jacobsen exposes himself as a manipulating provocateur with a hidden agenda, rather than a passive resister. In this document written by Jeff Jacobsen he shows concerns over the fact that the Church is not attacking the “picketers”.

“My fear is that picketing [church location] is getting harder and harder to do, and besides, the church has learned not to attack us any more, which makes picketing a bit more boring for the media.” 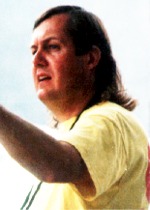 This clearly shows on one level that Jacobsen premeditatedly worked to ensure that the media was involved with his hate campaign against Scientology and Scientologists. But this was not the primary reason for Jacobsen’s concern. His concern was to goad the Church into responding to his attacks so he could cast it in a bad light. So he added a new twist to the upcoming hate march to intentionally provoke the Church into taking some action.

This new tactic of provocation is a workshop on Scientology and we quote Jeff Jacobsen:

“One reason to do the workshop is so [the church] will attack it. They seem to have learned not to attack the picketers, but I am pretty sure they would picket our workshop, and maybe try to disrupt it.

“I’m pretty sure they will attack a workshop.”

The above are not the statements of a passive resister but the words of an agent provocateur, or rather, a hate-monger.

Jeff Jacobsen is an instigator of continuous harassment against Scientology and Scientologists.

In 1999, Jeff Jacobsen received $10,000.00 for his anti-religious activities. Thus, there is no doubt that Jacobsen is factually carrying out a plan to cause a surge of violence against the Scientologists.