David Touretzky posted to the Internet the exact step-by-step instructions on how to make a fertilizer bomb and other bombs. One of the instructions tells the reader to drop the bomb in police cars.

In April 2003, reporter Karen Welles of Pittsburgh’s WPXI echoed that community’s shock at the discovery that this act was perpetrated by a local, so-called educator.

“It’s right there in plain English — directions on how to make a fertilizer bomb. It’s not on some terrorist’s Web site. It’s on the Carnegie Mellon University Web site of computer science professor Dr. David Touretzky.”

Touretzky’s site is mirroring information that was originally published on the web by a California teenager who was arrested in 2002 for using his site to distribute bomb-making instructions. Before federal law enforcement officials could remove the offending site, Touretzky mirrored all of the bomb-making instructions on Carnegie Mellon University’s computer system, where it is available to this day.

Timothy McVeigh used instructions like these, downloaded off the Internet, to build the fertilizer bomb he used to blow up the Oklahoma Federal Building and commit mass murder. The teenagers who committed the Columbine murders also built a bomb using instructions like these downloaded off a website. Touretzky’s site further proliferates this information, making it that much more available to any unbalanced person who cares to use it.

Touretzky attempts to absolve himself from responsibility by placing a disclaimer on his site. While he claims to not agree with people who build bombs and lob them at police officers, he certainly seems happy to supply exact information on how to do just that.

Touretzky’s website is sponsored by Carnegie Mellon University with their full knowledge and agreement. This is the same university that, in 2002, received a $35 million grant from the U.S. Department of Defense to research ways and means to reduce the threat of Cyberterrorism. If CMU is serious about reducing this threat, as opposed to merely taking the taxpayer’s money, it should start with Touretzky before some terrorist looking for the means to kill innocent people will act again. But if CMU is going to promote instruction manuals for terrorists on its websites then it should lose its grant.

Touretzky himself receives public funds to support his research projects and then uses the facilities to post his bomb-making instruction, engage in hate speech, and attack groups that are helping people.

In Welles’ report, however, two CMU officials scurried to defend Touretzky’s act pointing out that it is not a crime, but their justification is not very believable.

Touretzky is certainly teaching terrorists and anyone on the Web how to build bombs. It is pretty incredible that Touretzky could expect anyone to believe that he doesn’t intend to teach terrorists how to make bombs when he puts this information on the Internet, and the media has published that terrorists use the Internet. 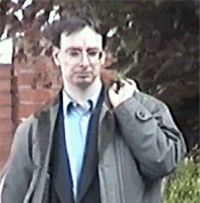 A British Ministry of Defence employee, Christopher Owen, a chat room pal of Touretzky, appears to be of the same frame of mind as Touretzky when he made the following statement about Osama Bin Laden in a chat room:

“Osama’s a lousy strategist but a briliant tactician.”

That comment was made by Owen two months after the September 11 attacks in New York, Washington D.C. and the plane that crashed in Pennsylvania. In Owen’s view killing innocent men, women and children is a “brilliant tactic”. In other words to destroy lives, which is what terrorists do, is a great skill.

Religious Freedom Watch is currently reviewing more than 500 IRC logs which contain information on what David Touretzky, Robert Clark, Christopher Owen, Kady O’Malley, Scott Pilutik and several other anti-religious extremists have been doing behind the scenes on several fronts, some of which will be turned over to law enforcement as they appear to have exceeded the legal limits.