Circa 1999-2002, David Touretzky was given $338,334 in grant funds obtained from the National Science Foundation, to conduct experiments involving the use of rats and “Amelia” a mobile robot

Touretzky, and one graduate student, were averaging about $68,000 a year, plus additional funds for, domestic travel, publication costs, etc.

The project claimed to have “implications for theories of animal cognition, for robots that learn by exploration and experimentation, and for robots intended to learn from human teachers. … Unlike classical (Pavlovian) conditioning, in which animals learn simple associations between stimuli, in operant conditioning animals learn to interact with their environments in order to produce rewarding outcomes. But conditioning in either form involves more than just modifying behavior. It includes modifying the structure of the learner itself …”

One “complex behavioral task” conducted as part of the grant was described as ” … rats had to learn to press one of two retractable switches, then perform nose pokes at a nose poke port elsewhere in the environment, and then, when both switches have been extended, return tot he switch pressed previously and press it again in order to earn a water reward,” No doubt that Touretzky could explain away such a “complex behavioral task” in complex scientific jargon to justify “nose pokes.” What that is exactly is unknown to those not in the inner circles of lucrative grant funneling. 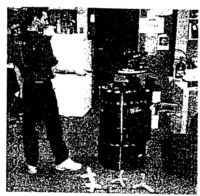 Amelia, the RW1 B21 mobile robot
holding one of her toys in her gripper